New Guinea remains one of the least biologically explored regions of the world, and much remains to be learned regarding the diversity and evolutionary history of its flora and fauna. Recent taxonomic discoveries include the Vogelkop Lophorina (Lophorina niedda; Scholes & Laman 2018), split from the former Superb Bird-of-Paradise (Lophorina superba), and the recognition of several independent families, such as the Ifrita (Ifritidae), the Australo-Papuan Bellbirds (Oreoicidae) or the Melampittas (Melampittidae) (Winkler et al. 2015). 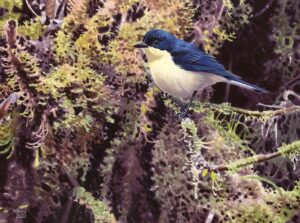 The New Guinea avifauna is so unique, in many aspects, because the region is considered a cradle for several families of Passerines, which performed a radiation in that island, generating new species inhabiting only this enormous island (Fjeldså et al. 2020). If we compare the number of bird species on New Guinea against other large tropical islands, it contains 769 species, while Borneo 688, Sumatra 580, Sri Lanka 493 and Madagascar 258 (Beehler and Laman 2020).

Continuing with New Guinea’s rich tradition of exciting avian discoveries, a new species of Melanocharis berrypecker (Melanocharitidae) was discovered during a recent ornithological expedition to the Kumawa Mountains in West Papua, in the cloud forest at an elevation of 1200 m. This new bird has iridescent blue-black upperparts, satin-white underparts washed with lemon yellow traces, and its external rectrices are edged in white (Milá et al. 2021).

The species was found in Bird’s Head Isthmus, also known as the Bird’s Neck, which connects the Bird’s Head or Vogelkop Peninsula to the rest of New Guinea and harbors a unique landscape of rugged and isolated limestone karst mountains, hosting an impressive range of ecological niches as a result of complex terrain and variable climatic conditions. This region is still largely unexplored because of its treacherous karst terrain, steep slopes and complete lack of streams and other surface water at high elevations (Diamond & Bishop 2015). The Kumawa Mountains are uninhabited by humans and apart from coastal areas, have likely always been so. The area has no access roads and no trails, which has left most of the forest landscapes intact. The expedition team reached their site by boat and set up camp. 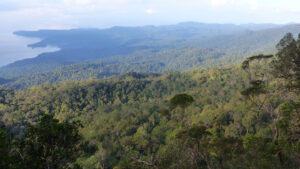 The research team, led by Borja Milá, from MNCN-CSIC, Spain, initially thought this new species represented a close relative of the Mid-mountain Berrypecker (Melanocharis longicauda) based on elevation and plumage color traits. A complete phylogenetic analysis of the genus based on full mitogenomes and genome-wide nuclear data, however, revealed that the new species, named as Satin Berrypecker (Melanocharis citreola) sp. nov., is in fact sister to the phenotypically dissimilar Streaked Berrypecker (M. striativentris). Phylogenetic relationships studied by this team within the family Melanocharitidae included all presently recognized genera (Toxorhamphus, Oedistoma, Rhamphocharis and Melanocharis), revealing that this family endemic to the island of New Guinea diversified during the main uplift of New Guinea in the Middle and Late Miocene (14-16 million years ago). It represented an evolutionary radiation with high disparity in bill morphology and signalling traits across species. Rhamphocharis berrypeckers fall within the Melanocharis clade despite their larger beaks, and should be included in the latter genus. They found interspecific genetic distances in Melanocharis were pronounced, suggesting a long history of independent evolution of all lineages corresponding to currently recognized species, including the new described Satin Berrypecker. 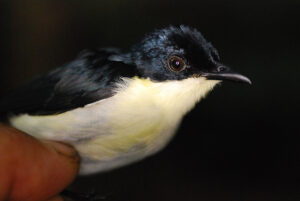 Winkler, D.W., S.M. Billerman, and I.J. Lovette (2015). Bird Families of the World: An Invitation to the Spectacular Diversity of Birds. Lynx Edicions, Barcelona. Editor’s note: The entire text of this volume was updated and included in Birds of the World. To find the texts, click on any family account.